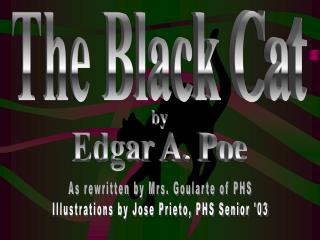 The Black Cat. by. Edgar A. Poe. As rewritten by Mrs. Goularte of PHS Illustrations by Jose Prieto, PHS Senior '03. 1843. …written from a prison cell….

BLACK HOLES: The Other Side of Infinity - . presented by: sarah silva (ssu nasa) and phil plait. the show content. the

8K LIGHT - . optical illusions. which is darker a or b?. black spots appear at the intersections. the grey centre bar is

Black Friday - . november 26 th 2010. what is “black friday”. black friday is the day after thanksgiving when store

Miami Urban League Report Card on Black America - . 2010: where we stand. the report card. where does black america stand