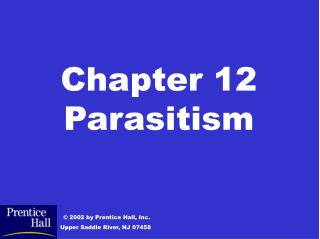 Chapter 12 Parasitism. © 2002 by Prentice Hall, Inc. Upper Saddle River, NJ 07458. Outline. Parasites feed on a host, but generally do not kill it Hosts have evolved many defenses (e.g., immune responses) against parasites Parasitism - . ishaba haque ib ess y1 08/02/11. what is parsitism ?. parasitism is the relationship between organisms of

Parasitism Ticks - . bird infested with ticks. the ticks benefit but the bird is harmed. different types of ticks that

Parasitism and Disease - . lyme disease cycle in the uk. evolution of host-parasite interactions . european rabbits as

Parasitism Example Swimmer’s Itch ( schistosomiasis ) - . swimmer’s itch (sum up in your notes). swimmer's itch is an