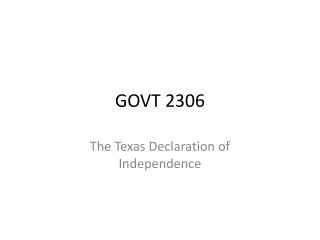 GOVT 2306 - . the development of state constitutions and the texas

Introduction to GOVT 2306 Texas State and Local Government - . this section’s topic: what exactly is this class and why

TEXAS GOVERNMENT 2306 - . unit 9 the bureaucracy. the executive branch. that part of government that administers the law

GOVT - . chapter 3 federalism. learning objectives. federalism and its alternatives. what is federalism?. in a federal