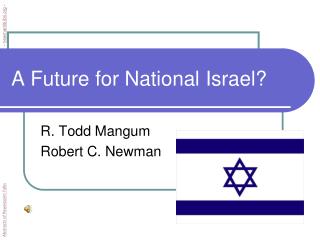 Israel 2008 - . headline bush on his first visit to israel as president: our alliance guarantees israel’s security as a

ISAIAH CHAPTER FORTY-FOUR - . outline isaiah chapter forty-four. god's blessing on israel v. 1-5 there is no other

Unit 3 and 4 - . israel, persia, rome, and greece. ancient israel (click on for powerpoint alternative). what religion is

ESRD: State of the Art and Charting the Challenges for the Future - . beth israel deaconess and harvard medical school

Biblical Zionism and the Restoration of Israel - . by dr. gavin finley endtimepilgrim.org. for jerusalem’s sake.

Rise of the - . today, all the nations are alligning exactly as the bible said they would! possible scenario…. a man