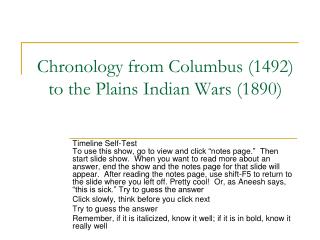 Chronology from Columbus (1492) to the Plains Indian Wars (1890). Timeline Self-Test

Chronology! - . by: daniel hall, laura pardo and paula suarez. . what is

Chronology Activity - . define chronological order: make a list of 10 events in your life and put them in chronological