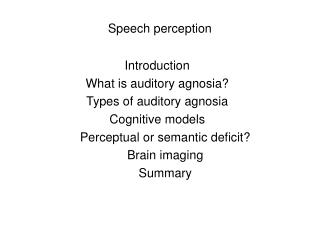 Perception - . it’s not as easy as it looks. sensation and perception. sensation the process through which the senses

The process of speech production and perception in Human Beings - . speech generation. the production process

Two /b/ or not “too bee”: - Gradient sensitivity to subphonemic variation, categorical perception and the effect of

INTRODUCTORY PSYCHOLOGY – CHAPTER 5 - PERCEPTION - . what are 6 features of perception?. *knowledge-based - we

Parts of Speech - . sudeshna sarkar 7 aug 2008. why do we care about parts of speech?. pronunciation hand me the lead

OBJECTIVES Identify the parts of speech Determine the part of speech by analyzing the use of those words in sentences.