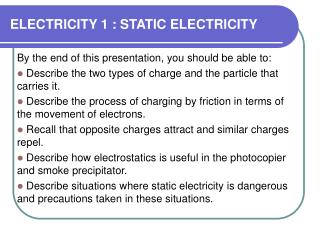 ELECTRICITY 1 : STATIC ELECTRICITY. By the end of this presentation, you should be able to: Describe the two types of charge and the particle that carries it. Describe the process of charging by friction in terms of the movement of electrons. ELECTRIC CHARGE - . just as the mass of the earth exerts an invisible force on you because of your mass. any two objects

Electrostatics - . electrostatics demonstrate how you can pick up the paper pieces without touching them in any way with

Current Electricity - . current electricity. the movement of electric charge from one place to another. voltage.

Ch 6 Electricity for everyone - . green energy and home design. p142. whiteboard. what is “green energy”? what is a

Electricity - . n bronks. basic ideas…. electric current is when electrons start to flow around a circuit. we use an

Effects of the Transmission Network on Electricity Markets - . introduction. no longer assume that all generators and

Electricity and Magnetism - . review from chem. matter is made up of atoms, what are the parts of the atom? which parts

Electricity - . the importance of electrical power seems obvious in a modern industrial society. what is not so obvious