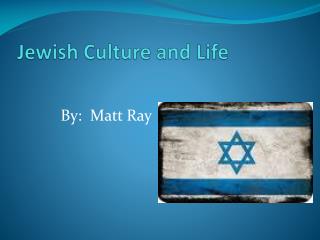 Jewish Culture - . guiding questions:. which are the main characteristics of the country’s culture?. food specialities

Jewish History and Culture Pathway - . what is it ?. option to study history with a focus on jewish history and culture

Jewish Life In Poland - . wysock, a tiny village in volhynia, 1937. a well in a rural area of volhynia, not far from

Jewish Life In Poland - . wysock, a tiny village in volhynia, 1937. a well in a rural area of volhynia, not far from the

Museum of Jewish Culture Bratislava - . presentation by stanislava mináriková. about the museum. an exhibition

“Jewish Life Happens Here” - . it all starts here…. the classroom door is the child and family’s first view of

Jewish Life on Campus - . little systematic information exists jewish identity is both a cultural and religious

Jewish life in Europe - . sorting cards. jewish life in europe before the second world war. preparation: on the

Culture and Daily Life - . superstitions. people used superstitions to cope with the world around them. life could take

BRITISH LIFE AND CULTURE - . what is the difference between uk, england, great britain (gb) and british isles?

Culture and Organizational Life - . national values and organizational practices. differences in hrm among 5 clusters of

Judaism: The Jewish Religion and Culture What does it mean to be Jewish? - . judaism is…. “ a 4000 year old tradition

Technology, Culture and Everyday Life - . chapter 11 1840-1860. introduction. how did technology transform life in