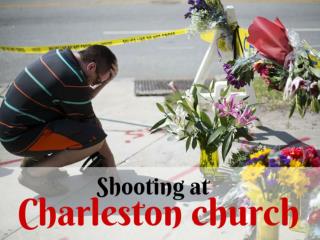 Nine people were killed Wednesday night when authorities say Dylan Storm Roof, 21, fired upon a prayer meeting inside the Emanuel AME Church in Charleston, S.C. Roof was captured on Thursday after an intense manhunt. How To Establish a Prayer Ministry in Your Local Church - The prayer saturated church. mobilizing, organizing and

THE CHURCH IN THE MIDDLE AGES - . major themes i. christianity ii. history of the church iii. organization of the

HEART STONE PICTURES presents A docudrama based on the June 22, 1980 shooting at First Baptist Church of Daingerfield,

TETRATHLON Shooting - . tetrathlon shooting phase. background about the guns and pellets setting up a range ranges

STREET SHOOTING - . explore the use of the accidental in a close urban environment, possibilities for shooting in an

Battle of Passchendaele The Third Battle of Ypres - . by: matti chrisman. facts and statistics. the battle was launched