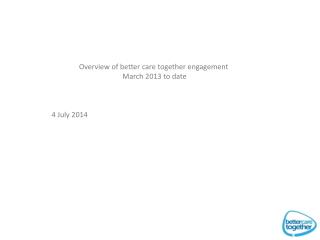 Together is Better - . presentation to the third international conference on patient and family-centered care seattle, wa

Better Together Dorset - . dorset business the chamber of commerce and industry. economics bsc: the university of york

Better Together - . building partnerships to support bicycle and pedestrian planning in asheville and buncombe county.

Together We’re Better - Collaborative approaches to including children with and without disabilities. together we’re

Better Together: - . better together: committing to