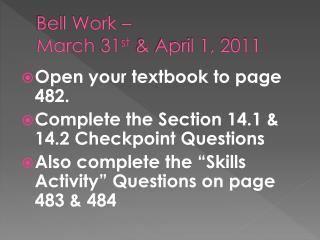 Bell Ringer 8-9-10 - . what is science? explain three main skills that scientists use. define the term scientific

The End Of The World! - . freindly bystander!. aliens!. humans!. we have found the crash site. holo box has been found.

Bell Work - . which of the following explanations do you think shows the best understanding of the quotation and why?.

Bell Work - . can you answer this riddle? write your best guess in your notebook. a young lady looked at a picture and