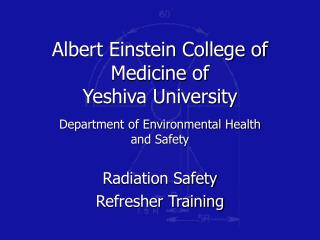 Albert Einstein College of Medicine of Yeshiva University. Department of Environmental Health and Safety Radiation Safety Refresher Training. Goals. On completion if this training you should have:. Knowledge of the specific and general requirements for working with radioactive material Bright Futures Adolescence 11- 12 Years - . the health system must adapt to the needs of adolescents, and their needs

Albert Bandura - . self-efficacy. by: amanee huwaidi. albert bandura. you can do it!!!. watch the video.