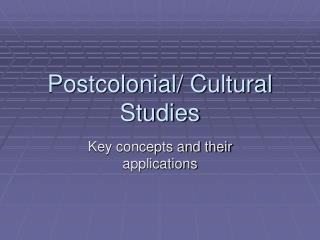 Postcolonial/ Cultural Studies. Key concepts and their applications. Post-Colonial/Postcolonial. Hyphenated (-) Postcolonial implies the effects of colonialism on cultures after the end of colonialism, such as the legacy of Eurocentric modernity.

A2 PE COMPARATIVE STUDIES: The USA - . the usa: a cultural

Cultural Quotient - . what is cultural quotient (cq)?. “the ability to cope with national, corporate and vocational

postcolonialism - . east is east. post(-)colonialism. with or without a hyphen post-colonialism (chronological

The definition of Orientalism