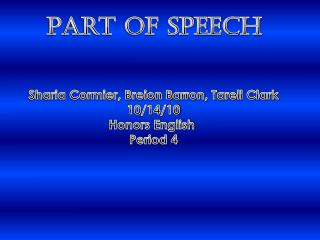 Part Of Speech. Sharia Cormier, Breion Barron, Tarell Clark 10/14/10 Honors English Period 4. Nouns. Noun- a word or word group that is used to name a person, place, thing, or idea. Common- names any one of a group of persons, places, things, or ideas and is generally not capitalized. Part of Speech - . definition. examples. identified part of speech in sentences the only thing we have to fear is fear

Part-of-Speech Tagging - . l545 spring 2010. pos tagging problem. given a sentence w1…wn and a tagset of lexical

Part of Speech Tagging - . september 9, 2005. part of speech. each word belongs to a word class. the word class of a word

Part of Speech Tagging - . chapter 5, part 2. stochastic tagging. based on probability of certain tag occurring given

Part-of-Speech Tagging - . l545 spring 2013. pos tagging problem. given a sentence w1…wn and a tagset of lexical