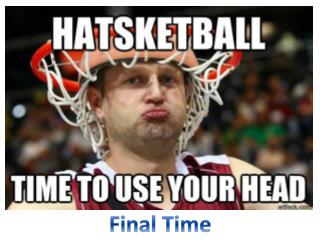 Final Time. Meet the Teams. Rock. Scissors. Paper. Rules. Team 1 goes first. Then Team 2. Then Team 3 Each team put its desks in a circle. Everybody must have their Packet and Study Guide out. Work as a team to find the answers to the questions. All the answers are in your packet. TIME MANAGEMENT - . time : its attributes. time is neutral time cannot be saved for future use each activity requires a

13: Final Review Intro Econ - . c.l. mattoli. intro. this will be a final review of intro econ. we warn that this is by

Final final review part three - . the blood vessels and nerves of the skin are located in this layer. what is the

FINAL DRAFT: Main Linac Beam Dynamics - . kiyoshi kubo draft 2006.05.19 (some slides will be skipped in the lecture, due

4. Time Study - . the major objective of this chapter is to learn how to calculate a time standard based on stopwatch