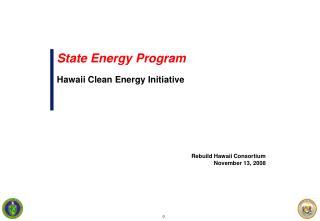 State Energy Program Hawaii Clean Energy Initiative. Rebuild Hawaii Consortium November 13, 2008. What is important to Ted Peck. Collaboration - I will look for opportunities to give others the opportunity to contribute and I will value what they bring 13-14 November 2008, Turin - Ethnic groups and social inclusion in education and training in the western balkan countries