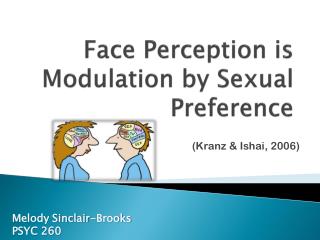 What is Modulation? - . in modulation, a message signal, which contains the information is used to control the

Perception Is… - . the process of recognizing, organizing, and interpreting sensory information. two theories.

Perception is… - . awareness of things (aka reality) through our 5 senses sight smell touch hearing taste.

Face Perception II. Visual Imagery - . is face recognition special?. arguments have been made for both functional and

What is perception? - . accumulation of experiences that cause us to become more aware, causing us to organize and

PREFERENCE - . by: vita nihayatul khusnia x-mm.1 39. asking about preference. which do you prefer….. do you like…..