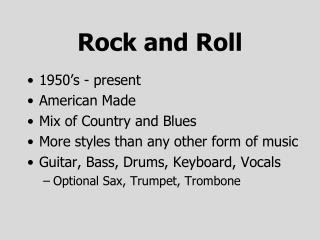 Rock and Roll - . 1950’s to today!. post wwii. a time of economic prosperity. a new optimism for the future led to the

Rock and Roll - . by: lindsey, nick, kristen, &amp; andrea. some history of the rock genre. it is a form of popular

Rock and Roll - . amu4ei mr. cowan. what is rock and roll?. what evolved out of early blues and rhythm and blues african

Rock n Roll - Facts about 50's music. the classic rock age only lasted 5 years 1954-59began in the usa with a mixture of