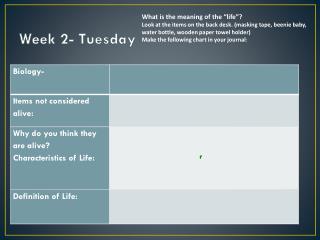 Week 2- Tuesday . What is the meaning of the “life”? Look at the items on the back desk. (masking tape, beenie baby, water bottle, wooden paper towel holder) Make the following chart in your journal :. Chapter 1: Exploring Life. Introduction to Biology and the Scientific Method.

Calendar - . this is a calendar. it tells about the days , weeks , and months of the year . what is a day ?. the earth