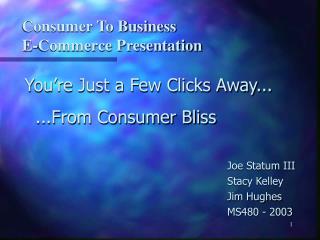 Consumer To Business E-Commerce Presentation. You’re Just a Few Clicks Away. ...From Consumer Bliss. Joe Statum III Stacy Kelley Jim Hughes MS480 - 2003. Overview. What and Who is Business-to-Consumer E-commerce? How Big is It, Where is it Headed? Demographics Tax Implications From E-Commerce to E-Business - . table1.1 the rules of e-business. rule1 technology is no longer an afterthought in

E-commerce and Consumer Trust - . problems with engagement and some potential solutions. jason rutter esrc centre for

MOVING FROM E-COMMERCE TO E-BUSINESS

e-Commerce &amp; e-Business - . e-commerce basics application of the internet and extranet in the business &amp;