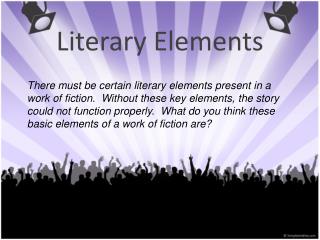 Literary Elements and Devices in Rikki Tikki Tavi - . learning objectives:. analyze elements of the plot in the story you

Literary Terms - . for the rime of the ancient mariner by samuel taylor coleridge. point of view. the point from which

Literary Devices - . short story objectives. robert frost said that a poem should “begin in delight and end in

Periodic Law - . do now: what does an element’s position on the periodic table indicate about its properties?.

Literary Elements Game - . show us what you remember from all of our mini-lessons!!. alliteration. repeating the first

Literary Terms - . allegory: a story which has meaning on both the literal and figurative or moral level. e.g. “young