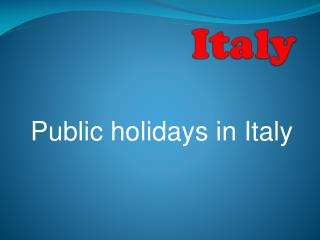 ITALY - . this is a map of italy. italy is located in mediterranean sea on the underside of europe. italy is a peninsula

Italy - . by jack ella merritt. where is italy?. italy is on the continent of europe. in napoli mt. vesuvius which is a

ITALY - . by: camille bartley(:. map of italy. type of government. italy has been a democratic republic since june 2,

Italy! - Hello or ciao! i am here today to show you about italy! italy’s flag colours are green, white and red. italy