What is The Story Grammar Marker (SGM)? - PowerPoint PPT Presentation 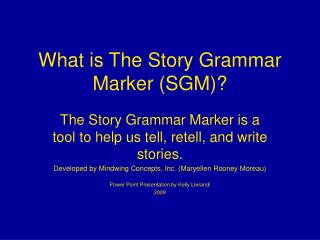 What is The Story Grammar Marker (SGM)? What is The Story Grammar Marker (SGM)?

The story is about: - . ants. jonathan zea is the author. barry runk is also a photographer. author writes the stories.

What is Point of View? (POV) Who is telling the story? - Aim: what does “point of view” mean in a story and how do we

What is a Digital Story?

Grammar Engineering: What is it good for? - . miriam butt (university of konstanz) and martin forst ( netbase solutions).

WHAT IS A SHORT STORY? - . short stories. have a theme – main idea. have plots and structure – organised by the

What is your story? - . “small town girl with farms and rodeos in my past, to a city/country girl pursuing her

What is a Short Story? - . a short story: gets off to a fast start. generally has a limited number of characters and

English Names -What is the story behind ? - . 96501044 nancy kao. top names ranking the history of english names (first

What is a story? - . “journalism: storytelling with purpose”. a  story  is an arrangement of words and images that

What kind of story is it? (What is the genre ?) - Fiction (fake, not real) fantasy : could never happen (charlie and the

What Is The Story Your Graph Is Telling? - . by rachel valcin &amp; jon burns. learning objectives. to create a line

What is an Imaginative Story?

What is grammar? - . first of all , relax…. you can learn grammar. if you already know a lot of grammar, you can

What is a Ghost story? - . “ the ghost story must impart a strong sense of place, of mood , of the season, of the

What is Grammar? - . descriptivism vs. prescriptivism. conceptions about grammar. s omething that young people are not