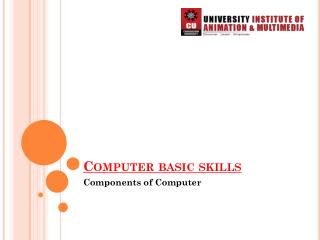 Computer basic skills. Components of Computer. COMPONENTS OF COMPUTER. A personal computer is made up of multiple physical components of computer hardware, upon which can be installed an operating system and a multitude of software applications to perform the operator's desired functions. Using Your Computer - . basic computer skills. turning it on!. if you are using a desktop computer (it has a “tower”

Emergency! Computer Tips to Help You When IT is Not Available - . speakers: brian neale roger skalbeck barbara fullerton.

Geography Skills Handbook - . introduces you to the basic geographic tools globes maps graphs explains how to use them.