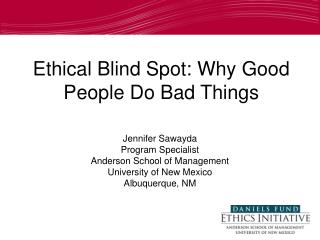 Why letting people be bad is good - Lord devlin's

Bad Things Happen To Good People - . good things happen to bad people! the god of this world in the valley of temptation

“The Blind Spot” - . by: nygel king j.r. &amp; michaela williams. what is your blind

Demonstration of Blind Spot - . j.w. whitlow rutgers university. basic phenomenon. the next slide has a cross on the left

When bad things happen to good people - . analyzing evil in the book of job robert sutherland – calgary, ab. the

Why Do Good - “let us not become weary in doing good, for at the proper time we will reap a harvest if we do not give

When Good Things Happen to Bad People - . why are the wicked getting rich while i struggle? a study of psalm 73.

Why Good People Do Bad Things - . thesis. the capacity for doing bad or even evil things can be explained (in part) by

Why good companies go bad - When business conditions change, the most successful companies are often the slowest to