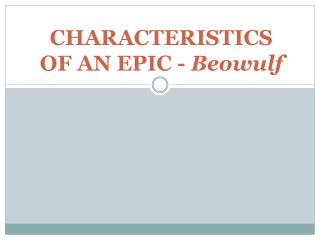 Characteristics of the Epic - . most epics share certain characteristics: the hero is of imposing stature, of national or

Beowulf - . beowulf. what is an epic? when and where does this epic take place? what cultural values are shown in the

General Characteristics of an Epic - . long narrative poem. retelling important events in the life of a central hero who

BEOWULF - . beowulf. written in old english sometime before the tenth century a.d., describes the adventures of a great

The Epic, The Epic Hero, and The Epic World In Media - . prof. q ut arlington. the world of the epic. the iliad – the

Beowulf - . poet unknown anglo-saxon and old english christian (but with a bit of pagan tradition) epic poem (with 3,182

Beowulf - . beowulf manuscript background . beowulf is the first surviving epic written in the english language. the

I Know My Epic Characteristics - . call to the muse. the poet asks for divine inspiration from the muses to help him tell

Characteristics of an EPIC HERO - . the central figure in a long narrative that reflects the values and heroic ideals of

Beowulf - . an epic of good vs. evil. what is beowulf? who is beowulf?. beowulf is an epic poem that tells about the