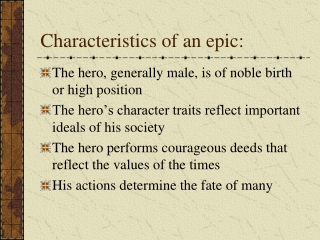 Characteristics of an epic:. The hero, generally male, is of noble birth or high position The hero’s character traits reflect important ideals of his society The hero performs courageous deeds that reflect the values of the times His actions determine the fate of many. That was EPIC! - Jeopardy. save the drama for your mama!. that was epic!. ladies of the odyssey. gods and monsters. that

The Epic Poem &amp; The Epic Hero - . epic. a long narrative poem that relates the great deeds of a larger-than-life

The Epic - Myth—contains supernatural elements to explain the natural world; gods and goddesses interact with humans.

Anglo-Saxon Literary Elements - . the epic and the epic hero http://www.youtube.com/watch?v=gln2r1jvvic. qualities and

Beowulf - . english 11 cp. what is an epic?. a long narrative poem that tell of the adventure of heroes originally

Epics and Epic Heroes - . journal. what makes a hero? what are four qualities a hero must possess? . what is an epic?. a

The Odyssey, Part I - . pg 1042. objectives:. identify the elements of epic heroes use background and prior knowledge to

INTRODUCTION to EPIC POETRY - . 1.what is epic poetry? what does “epic” mean?. epic. it comes from the ancient greek

Beowulf is an epic - . an epic is a long poem about a larger than life hero. characteristics of an epic:. a loyal hero

What is an Epic Hero? - . think of “big” heroes, especially from myth (like odysseus from the odyssey ). what are