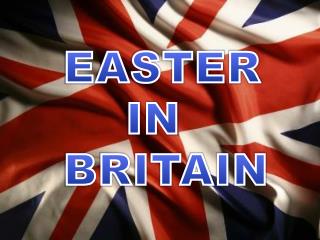 EASTER IN BRITAIN. Easter is one of the major Christian festivals of the year in the UK. Easter in Great Britain - . easter comes in spring (in march or april). it is a religious celebration and lasts for a

EASTER IN BRITAIN &amp; USA - . easter – what comes to mind?. do you know that…. easter is a religious holiday

Easter traditions and symbols in Great Britain - . easter is a very important festival in great britain . easter day is

There are many Easter symbols in Great Britain: Easter Eggs, Easter Bunnies, Chicks. - British easter is the

EASTER IN POLAND - Easter holiday starts in poland from „great thursday”- it’s the thursday before easter. „

Easter in Romania - . easter in romania. the easter is the most important celebration of the romanian people and it is

Easter in Romania - . by alexandra durac.

EASTER IN HUNGARY - . the hungarians call lent the great fast. during lent it was forbidden to eat any meat. therefore

EASTER IN POLAND - . we decorate. e a ster eggs. we take food. to the church. we eat breakfast. on ester

EASTER IN LITHUANIA - . easter is the greatest annual church and national calendar, spring holiday. this date is set

EASTER IN ROMANIA - . the great