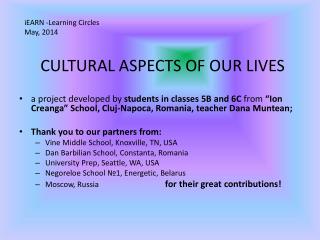 CULTURAL ASPECTS OF OUR LIVES. iEARN -Learning Circles May, 2014 . a project developed by students in classes 5B and 6C from “Ion Creanga ” School, Cluj-Napoca, Romania, teacher Dana Muntean ; Thank you to our partners from: Vine Middle School, Knoxville, TN, USA Links of our lives - . evangelizing the world one event at a time. planting and watering. evangelism is most often a

Celebrating Our Stories, Our Lives: Visualizing Cultural Heritage and Identity - . che diversity committee. she sells a

Cross cultural aspects of communication - . group 4. knowledge objectives. at the end of the course the learner will

OUR CRAZY LIVES! - How to incorporate school into the rest of our lives. our crazy lives!. our obligations. work? family?

Best Years of Our Lives - . from the “shrek” soundtrack. as performed in music express magazine volume 6 no. 5.

Our Lives Cumbria - . my personal story. learning about trust a bit about me – now and before i got my support please

FOUR SEASONS OF OUR LIVES - . the following pictures are of the same place but taken under different seasons!!. lessons

Changing our lives - . make the sentences with ‘although...’ 1. fred and doris/ be old/ still/ work in the fields/

Our Lives Our Centre Our Story - . an oral history project. funded by the heritage lottery fund. recording the history of