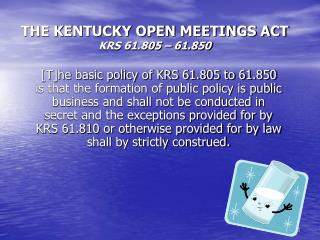 THE KENTUCKY OPEN MEETINGS ACT KRS 61.805 – 61.850. [T]he basic policy of KRS 61.805 to 61.850 is that the formation of public policy is public business and shall not be conducted in secret and the exceptions provided for by KRS 61.810 or otherwise provided for by law shall by strictly construed.

Chronic Disease in Kentucky Why it should matter to you! - . rice c. leach, m.d. commissioner kentucky department for

What is the Kentucky Youth Advocacy Project? - Jane klienert, ph.d., ccc/slp university of kentucky/division of

Welcome and Overview - Planning a system of interventions to prepare students for college and careers: lessons from