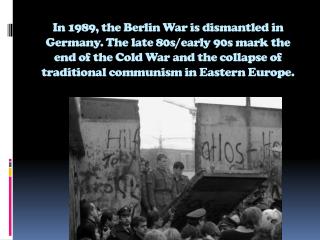 In 1989, the Berlin War is dismantled in Germany. The late 80s/early 90s mark the end of the Cold War and the collapse of traditional communism in Eastern Europe. In 1989, the Exxon-Valdez spills 10 million gallons of oil into the ocean, one of the largest ecological disasters of all time.