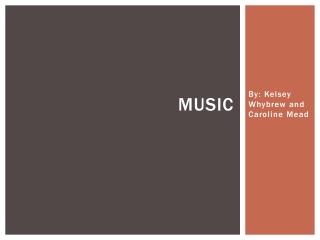 Music . By: Kelsey Whybrew and Caroline Mead . Introduction . Have you ever rebelled? How often do you listen to music? Do you discriminate based on race? To what extent did music provoke rebellion in teenagers during the 1960s?. Black Screen-each question is separate title page MUSIC - In 1989, the berlin war is dismantled in germany. the late 80s/early 90s mark the end of the cold war and the