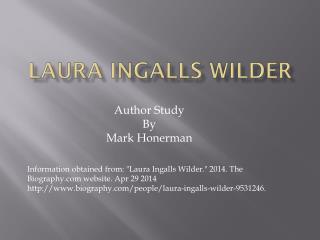 Laura Ingalls Wilder - .     y ankee doodle. by kody j. she moved to place to place on a wagon. she helped mary when

By Laura Ingalls Wilder Illustrations by Garth Williams - Summary. ? laura loves wading in the creek of her prairie

A Biography of Laura Ingalls Wilder 1867-1957 - . by payton. laura ingalls wilder. background. born in wisconsin she did

Billy Wilder - . his birth name was samuel wilder. facts about billy wilder. he was born on 22 june 1906. he was the son

Thornton Wilder - . born in madison, wisc in 1897 spent much time in china (far east) during his childhood

Jeff Wilder - . per.1. my interest. things i like to do. basketball library video games movies watching t.v. music i