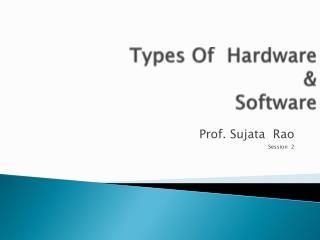 Hardware and Software - . hardware: the physical parts of a computer software: the instructions that make the hardware

HARDWARE &amp; SOFTWARE - . hardware and software. the computer is made up of 2 essential parts hardware: the

Types of software - . unit 11.1b software engineering . lesson starter. what is the difference between these types of

Hardware vs. Software - . a “java fun for everyone” interactive quiz. question 1. what is hardware? a program to

Hardware-Software Partitioning - . definition : given an application, hw / sw partitioning maps each region of the

HARDWARE AND SOFTWARE - . objectives. what computer hardware does our organization need? what networking arrangement is

Types of hardware - . george ford. input devices. . an input device is a device used to enter data into a piece of

Know what is Hardware and Types of Hardware - . omar alvarez. hardware. the physical components of a computer system, in

Computer Hardware Types of Memory - . while the cpu has a small amount of memory on the microprocessor, most of the