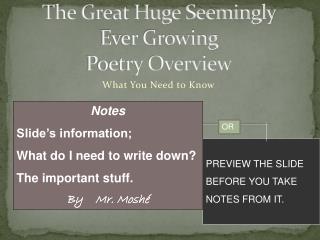 The Great Huge Seemingly Ever Growing Poetry Overview. Notes Slide’s information; What do I need to write down? The important stuff. By Mr. Moshé. OR. What You Need to Know. PREVIEW THE SLIDE BEFORE YOU TAKE NOTES FROM IT. What is poetry?. What Makes GREAT Poetry? - . a study in emotional technique. poem 1: funeral blues by w.h. auden. stop all the clocks,

The Ever Changing &amp; Growing World of Oracle - . august 2008. agenda. this is mean to be more of an open

Discover Exuberant Dubai: The Ever-Growing Ultramodern City - Dubai is intriguingly evolving as an amazing place for

Analyzing ever growing datasets in PHENIX - . chris pinkenburg for the phenix collaboration. stored in reconstructed

Analyzing ever growing datasets in PHENIX - . chris pinkenburg for the phenix collaboration. stored in

Great Deals Ever Shop Online - Is a large store for almost anything what you need. explore the greatest deals. now you

The Great Gatsby Overview PPT - . background to the great gatsby. world war i. post wwi. standard of living increased for

City of Sofia “Ever growing, never aging” - . geographical centre of south east europe and entry point to the middle