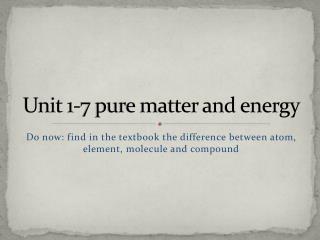 Unit 1-7 pure matter and energy. Do now: find in the textbook the difference between atom, element, molecule and compound. The Particulate Nature of Matter . Matter has mass and occupies space. It is composed of tiny particles called atoms (undividable) . . Elements . Unit 1: Chapter 1 Matter and Energy For Life - . cell theory. all living organisms are composed of one or more cells

Unit One: Matter and Energy - . don’t forget your safety quiz is tomorrow!. review lab safety:. what should you do if

Unit 2: Matter And Energy - . chemistry. in this science we study matter and the changes it undergoes. matter

Unit 1: Chapter 1 Matter and Energy For Life - . development of the cell theory. for hundreds of years a debate raged

Unit 2 – Matter and Energy - . mrs. callender. lesson essential question. how do i calculate energy in a system?.

Unit 1 Matter - . “if we all did the things we are capable of doing, we would literally astound ourselves.” thomas a.

Unit 1: Matter - . concept: structure of matter. ueq: in dealing with matter, how are composition, structure, properties