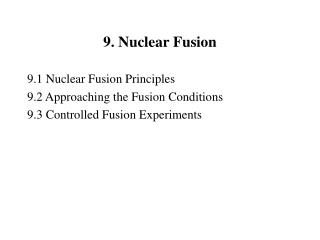 Nuclear Fusion - . the possibility. introduction. “every time you look up at the sky, every one of those points of

Nuclear Fusion - . fusion. ~the joining of nuclei to make larger atoms the sun produces energy in this manner. hydrogen

NUCLEAR FUSION - . 3 simple questions:. • why does the sun shine ? • why is gold more expensive than iron ? much

Nuclear Fusion - . process during which two or more atomic nuclei merge and form one heavier nucleus causes the release

Nuclear Fusion. - Nuclear fusion. by: shanique colon. what is

Nuclear Fusion Reactors - . advantages of fusion. they use abundant sources of fuel (not limited to a single type)

Nuclear Fission vs. Nuclear Fusion - . for example, one of the possible mechanisms for the decay of californium-252 is.

Nuclear Fusion Power - . the energy of the future?. past, present, and future. what is nuclear fusion? how was it