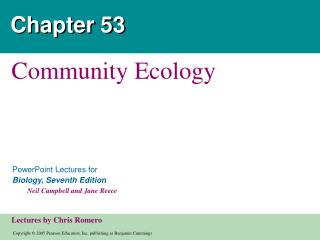 Chapter 53. Community Ecology. Overview: What Is a Community? A biological community Is an assemblage of populations of various species living close enough for potential interaction. Figure 53.1. The various animals and plants surrounding this watering hole Ch 53 – Community Ecology - . what is a community?. a group of populations of different species living close enough to