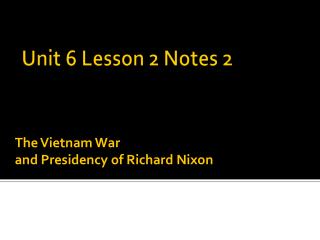 The Vietnam War and Presidency of Richard Nixon. Unit 6 Lesson 2 Notes 2. What You Will Learn. Let’s Review. The Cold War lasted from 1945-1991. The Cold War was….. The US adopted the policy of containment to prevent the spread of communism. Unit 2 Lesson 6 - . student will be able to…. articulate the role of government policies with regards to population

Unit 2 Lesson 6 - . secret place day 2. what we will review. compound words are made up of two words that help you

Unit 6 Notes Day 2 - . a correspondence is a way of matching up two sets of

Unit 2 Lesson 2 - . scientific tools &amp; measurements. check t or f to show whether you think each statement is

Notes 6-2 - . chemical reactions. chemical formulas. the formula of a compound identifies the elements in the compound

Unit 6, Lesson 2 Political Parties - . essential questions: what can i do to impact my government and community? learning