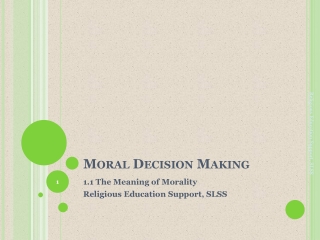 Moral Decision Making. 1.1 The Meaning of Morality Religious Education Support, SLSS. What is Morality?. How do we know what is right and wrong? Is something right if it causes pleasure? How do we know that something is good? Does evil exist? Business Ethics - . “doing the right thing, and making the good life better”. overview of ethics. what is business

In two minds: The neuroscience of decision-making - . deborah talmi, school of psychological sciences, university of

Decision Making Processes - . chapter 8. overview. one of the most critical activities in an org. is the making of

Decision Making - . introduction. what: decision making tools where: making business decisions why: we want to avoid