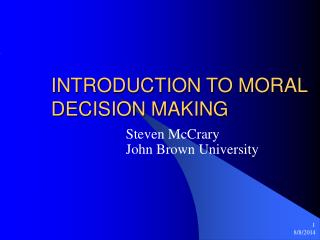 Business Ethics - . “doing the right thing, and making the good life better”. overview of ethics. what is business

In two minds: The neuroscience of decision-making - . deborah talmi, school of psychological sciences, university of

Introduction to decision- making and error Behavioral economics and consumer decision-making - . in this class, we will

207: Introduction to Family Group Decision Making (FGDM): Part I - . agenda. welcome and introductions what is family

Decision Analysis - . introduction. what is involved in making a good decision? decision theory is an analytic and

Decision Making - . introduction. what: decision making tools where: making business decisions why: we want to avoid

Decision Making - . train track and children. introduction. the story given here is quite interesting and really gives us