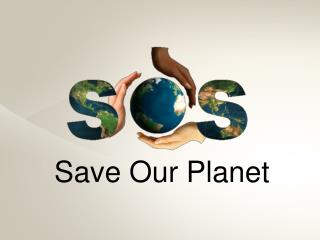 Save Our Planet. WE ARE AT CRISIS POINT. urgency. “If there is no action before 2012, it is too late. What we do now in the next 2-3 years will determine our future. This is the defining moment.” - Dr. Rajendra Pachauri, Chairman of IPCC “ Save Our Planet ” - Grade 8. “ save our planet ”. teacher: ruhiyye mahmudova. can a human being affect the

Save our Planet - . urgency. we are at crisis point. “we are all toast if we don’t get on another path.” ~ james

Save our Planet - . www.suprememastertv.com. urgency. we are at crisis point. “we are all toast if we don’t get

S.O.P (Save our Planet) - . s.o.p you as world leaders have the power to change planet earth. you can… . by zeina m

LET`S SAVE OUR FRAGILE PLANET - . why our planet is in danger ?. human beings are killing our planet. water pollution air

Save the Planet! - Help our community! how can we save our precious resource water in our community?. you will need a

SAVE THE PLANET - . make your life better!!!!!. rubish!!!. don’t throw rubish at the beach or in parks! any animal who

Save Environment to Save Planet - It's a universal truth, eco-sustainability is required for all live things. the

Save Energy, Save the planet - . cut your home utility bills freeing money for other things. reduce pollution and

Our Planet - . by: samantha peavler. on the next couple slides, they will explain how humans hurt our planet. also, there

Our Planet - . don’t open your book and work in pairs. discuss a place that you like in your country and a place that

Our Planet - . contents. internal structure of the earth theory of continental drift hypothesis of sea-floor spreading