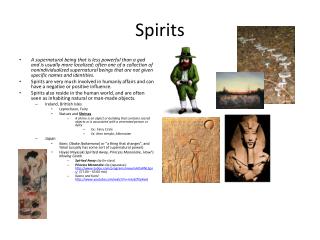 Spirits. A supernatural being that is less powerful than a god and is usually more localized; often one of a collection of nonindividualized supernatural beings that are not given specific names and identities. Fine Spirits - Are one of the main ingredients used in the production of alcohol. it is mixed along with other alcoholic

GOD’S MINISTERING SPIRITS - . “you alone are the lord, you have made the heavens, the heaven of heavens with all

GHOSTS AND SPIRITS - . by: tracy linn dravid. the brown lady. raynham hall in norfolk, england believed to be lady

Discernment of Spirits - . the information in this presentation has been taken from sources: 1. green, thomas. (1984)

Ghosts, Familiar Spirits - . &quot; what does the bible say about ghosts / hauntings?