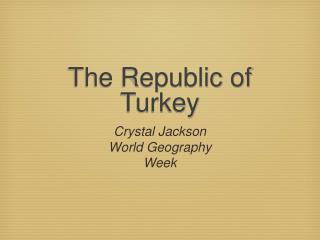 The Republic of Turkey The Republic of Turkey. Crystal Jackson World Geography Week. Geography. Turkey spans both the continents of Europe and Asia. Modern Turkey. Government is a democratically-elected republic. While the religion is 99% Muslim, Turkey is a secular country. Associate member of the EEC.

The Republic of Turkey

TURKEY - TÜrkİye. turkey. what do you know about turkey?. surrounded by 3 seas ; black sea,aegean sea and mediterrainan

Mehmet Emin ÖZSAN Republic of Turkey Ministry of Development - The use of s tatistics in local and r egional policies.

Republic Act No. 8791 - . kimberly lim &amp; katrina lu. title. an act providing for the regulation of the