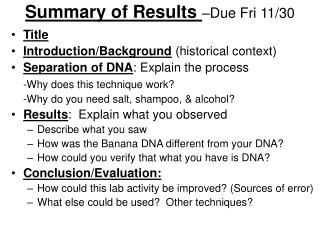 Summary of Results –Due Fri 11/30. Title Introduction/Background (historical context) Separation of DNA : Explain the process -Why does this technique work? -Why do you need salt, shampoo, & alcohol? Results : Explain what you observed Describe what you saw Summary of Results - This research is funded by u.s.epa – science to achieve results (star) program cooperative

A PowerPoint Summary - . act i, scene 1. three witches gather and say that they’ll meet with macbeth before sunset and

DUE GlobAEROSOL: Summary of current results and prospects for the future - . r. siddans. status at end of phase i.