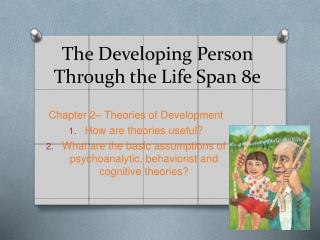 The Developing Person Through the Life Span 8e The Developing Person Through the Life Span 8e. Chapter 2– Theories of Development How are theories useful? What are the basic assumptions of psychoanalytic, behaviorist and cognitive theories? . What Theories Do. Developmental Theory

The Developing Person Through the Life Span 8e

Developing a Person-Centered Individual Support Plan - . for a good life in virginia. the 5 parts of the isp.

Other Attributes of Person or Corporate Body - . 9.4 - title of the person 9.6 - other designation associated with the

Life in the English Colonies - . chapter 6. working and trading. lesson 1. as an apprentice rope maker in the early

Psychology for Life and Work - . chapter 7 groups. groups. when i say “leader,” i mean not so much the person with

Journal Day 51: - . describe the event in your life which you can describe as the “most emotional time of my life.”

Kurt Lewin: Field Theory And Adolescence - . one of the lewin's core concepts is the law that behavior b is the function