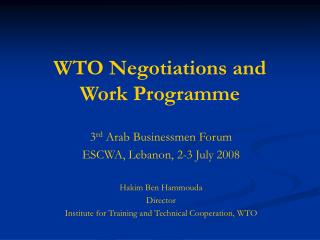 State of WTO Agricultural Negotiations - . meeting on the integrated assessment of trade liberalization in the

WTO Doha Round Negotiations in Agriculture - . state of play as of feb 2007. general tariff reduction formula,

WTO-AoA NEGOTIATIONS STATE OF PLAY - . genesis. wto came into existence on 1-1-1995 with the conclusion of uruguay round

WTO: The membership negotiations and the occurred problems - . emir djikic tirana, october 21 st 2005. with the support

UNFCCC Post-2012 Negotiations and the Nairobi Work Programme on Adaptation - . youssef nassef manager of the adaptation