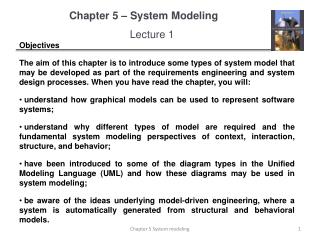 Chapter 5 – System Modeling. Objectives The aim of this chapter is to introduce some types of system model that may be developed as part of the requirements engineering and system design processes. When you have read the chapter, you will: Chapter 2, Modeling with UML, Part 2 - . outline of this class. use case diagrams describe the functional behavior of the

Chapter 2, Modeling with UML - . overview . what is modeling? what is uml? use case diagrams class diagrams sequence

Chapter 3 - . requirements modeling. phase description. systems analysis is the 2nd of 5 phases in the systems

Chapter 4 Requirement Modeling - . phase description. systems analysis is the second of five phases in the systems

Modeling - . eng. sara el- refaay eng. sara farghal. what is modeling?. modeling is the process of producing a model; a