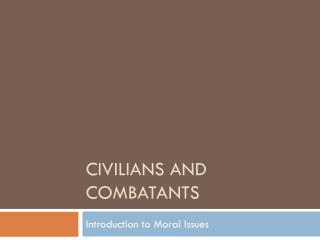 Civilians and Combatants. Introduction to Moral Issues. Us vs. Them. During wartime, do our “soldiers” lives take precedence over the safety of “their” civilians? Blogging news, civilians as observants of their world What is the answer of journalists? Peter Olsthoorn - What does

How were civilians affected by World War 1? - . aim: to revise key details about the british home front during the

The national impact of Benefits for F ormer Combatants - . by la’o hamutuk timor-leste institute for development

Wartime Germany revision - . by the end of this lesson… understand how the lives of civilians were affected by the war.

Terrorism - . what is terrorism?. no accepted definition. dictionary: the use of force or threats to demoralize,

WW2 The first conflict in which bombing of civilians was a deliberate policy (by both sides) - . air power became

Peace and Conflict in West Africa: Dealing with ex-combatants in Sierra Leone and Liberia - . walt kilroy school of law

Civilians at War (U.S.) - . women at work: many married women worked; most laid off after war ended; permanently changed