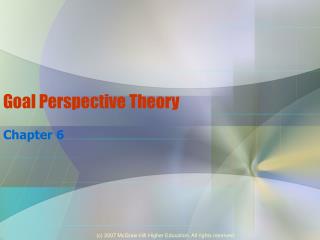 Path-Goal Theory - Expectancy theory. employees effort is tied to his perception thatthere is a relationship between his

Path-Goal Theory Approach - . aged 3153. leadership should be born out of the understanding of the needs of those who

Functionalist perspective / Strain Theory - . natural out growth of the values, norms and structure of society americans

The Theory of Goal Attainment Imogene M. King - . prepared by prof.dr nefissa a. kader vice dean of education and student